The Bridge That Works: The 2014 ASA Staffing Employee Survey 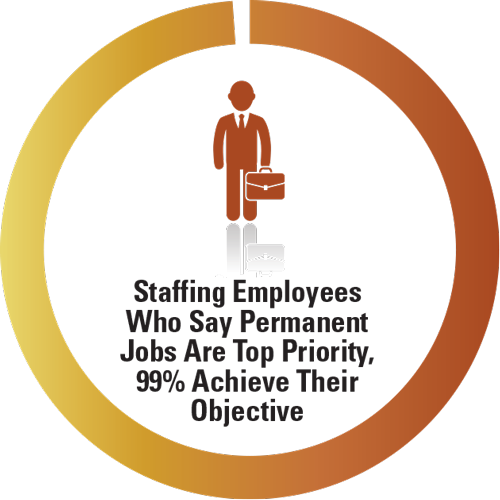 Fig 1. The Bridge That Works

We have new hard facts that put a fresh face on a powerful truth about the staffing industry: Temporary and contract work is an effective bridge to permanent employment.

Virtually all respondents to the 2014 ASA Staffing Employee Survey said that securing a permanent job was important to them, with half (49%) stating that was their primary reason for choosing temporary or contract work. Among those who cited a permanent job as their top priority, 99% achieved their objective (see Figure 1).

Temporary and contract employees are about as likely to work full-time as all adult workers (see Figure 2). Among those who bridged to permanent jobs, 94% work full-time.

While most staffing employees seek permanent employment, flexibility is also highly important to 97%.

And nine out of 10 say they are satisfied with their staffing company.

These are just some of the key takeaways from this year’s landmark ASA Staffing Employee Survey, in which nearly 12,000 temporary and contract employees from 275 staffing companies participated. See the “Methodology” sidebar on this page for survey details, and read on for more results.

Fig 2. 76% of Staffing Employees Work Full-Time, About the Same as the Overall U.S. Labor Force

Staffing employees have many motivations for selecting temporary and contract work. But most want permanent jobs. The top four reasons for choosing temporary or contract work are related to future employment ambitions (see Figure 3):

Other longtime hallmarks of the staffing industry also were confirmed by the results of the ASA Staffing Employee Survey.

One in five respondents (22%) said the reason for choosing temporary or contract employment was for work schedule flexibility.

Whether they were aiming for a permanent job or seeking flexibility, staffing employees gave overwhelmingly positive ratings about their experience. Nine out of 10 temporary and contract employees were satisfied with their staffing company, with 74% being very or extremely satisfied (see Figure 5).

Overall, the results of the 2014 ASA Staffing Employee Survey are almost identical to the results of the 2006 survey, which was conducted as the staffing industry was approaching its prerecession peak. In the most recent survey, there was a slight increase in the proportion of employees who turned to staffing firms out of need for work, as well as a modest decline in the preference for flexibility, but altogether the results of both surveys suggest remarkable stability in positive attitudes and experiences among America’s temporary and contract employees.

Fig 5. Nine Out of 10 Staffing Employees Were Satisfied With Their Employer

These findings serve as current affirmation of what every staffing professional knows well: When Americans want permanent jobs, temporary and contract assignments provide the bridge they need to secure the employment they want.

The findings also show that for workers seeking flexibility, the staffing industry offers that, too.

These attributes contribute to the overwhelmingly high satisfaction level reported by staffing employees.

Methodology: How the Survey Was Conducted

The survey was conducted on behalf of ASA by the polling firm Penn Shoen Berland. Online interviews were fielded Jan. 1 through March 10, 2014, among 11,969 current and former temporary or contract employees who had worked for 275 staffing companies at some time since Jan. 1, 2013. Participants were recruited through a two-stage process:

1. ASA invited and encouraged its member staffing companies to invite and encourage their current and former temporary and contract employees to complete the survey. As an incentive for companies to participate, ASA offered a free customized report of key findings to those companies with 30 or more surveys completed by their temporary or contract employees; the customized report compares the company’s results with the overall survey results. While promotion was focused on ASA members, nonmembers were not excluded; less than 1% of respondents were from nonmember firms. ASA provided promotional materials and ideas to assist staffing companies in encouraging survey participation.

The margin of error for this study is ±0.9% at the 95% confidence level and larger for subgroups. Participation levels for the 2014 survey are very similar to the 2006 study, in which 13,196 employees from 186 companies completed telephone interviews or online questionnaires from Jan. 23 through Feb. 17, 2006.