A dynamic online community for ASA members to exchange ideas and best practices, and connect with industry peers in their sector. Visit the site ›
Find Goods & Services

Your #1 daily source for news about the workforce industry. With versions available to members and nonmembers. Visit the site ›
Health Care Reform

From certification packages and study guides to marketing tools and data reports, ASA resources add value to your business. Visit the site ›
Back to Previous Page

By Michelle Snyder
Share:
In 2010, Iraq War veteran Ben Keen was faced with a life-changing decision: Get help, find work, and live the life he wanted—or continue a downward spiral of emotional turmoil and dependency. Today it’s abundantly clear that he made all the right choices, including engaging with a staffing company.

When asked to describe Ben Keen, staffing industry executive Susie Dietrich, SPHR, answers quickly: “Ben is the real deal.” It’s a simple response, but an exceptionally accurate one. Keen is the 2016 National Staffing Employee of the Year—an honor he was thrilled to receive. It is, after all, a well-deserved culmination of hard work, dedication, and making a meaningful difference in the lives of others.

Keen worked as a contract employee with Dietrich’s firm, e-Staff Consulting Group, in Pittsburgh, PA, in 2013. Today Keen is a valued contract employee of TEKsystems, another staffing firm, headquartered in Hanover, MD, and he’s currently on assignment as a technical operations analyst with PNC Bank. Jason Lis, director of branch operations for TEKsystems in Pittsburgh, says Keen has been a valuable addition to the company. Keen receives numerous accolades from the client and provides outstanding leadership to his on-site team—composed of both contract and permanent staff. The bank recently chose to extend Keen’s contract for another six months. 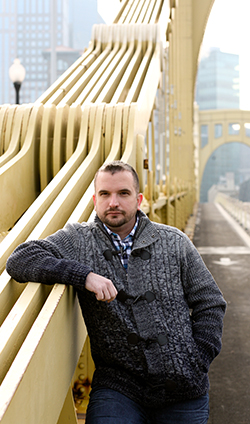 “We are only as good as the people we place,” Lis says. “And our relationship with Ben has been a great success…The client trusts him. We trust him. He does excellent work.”

Keen is a proud veteran of the U.S. Army. For eight and a half years, he served as a communications expert, providing critical voice and data communications to support forward combat operations.
Keen was among the boots on the ground during several deployments, including the historic 101st Airborne Division in Iraq. In 2003, his company endured enemy fire and he was injured. As he explains it, however, the physical wounds of war are much easier to heal than the emotional ones. Keen received an honorable discharge in 2008 and returned home to Pittsburgh unsure of his future.

Keen is a proud veteran of the U.S. Army. For eight and a half years, he served as a communications expert, providing critical voice and data communications to support forward combat operations.

As Keen describes it, “I was a young 27-year-old guy who was married with two children. I found myself in a city that I did not know, and without any sort of support outside of my then-wife and her
family—since my parents lived five hours away. I struggled at home with a failing marriage and two kids who knew to call me Dad, but still viewed me as this stranger in the house.”

Keen struggled with debilitating post traumatic stress disorder (PTSD), as he continued to battle the demons of war after returning home. As a means to escape, he turned to alcohol. “When I came home, I thought the solution to my struggles would be to drink my problems away,” he says. “For two years I was anything but employee of the year.”

Choosing The Road to Recovery

In October 2010, Keen had an experience that changed his life. In his words: “My daughter Rebecca asked me to play with her. While I was physically there, my mind was at the bottom of another bottle of liquor. And when I saw the look of sadness on her face when I said I couldn’t play, I received the biggest slap of reality across my face. I decided at that moment to turn things around.”

Keen bravely took steps to get the help he needed to begin to address his demons and “talk to people about what was happening behind closed doors.” He sought assistance in finding work—because like so many veterans transitioning from military to civilian life, he struggled to understand the new corporate world of work.

Do You Know the Next National Staffing Employee of the Year?

The National Staffing Employee of the Year is an extraordinary temporary or contract employee who best exemplifies one or both of the industry’s key messages of “bridge” and “flexibility,” and who has a great staffing success story to tell. Learn more about how to nominate one of your firm’s employees at americanstaffing.net/awards.

For example, “I didn’t understand the importance of having a résumé work for you rather than one that worked against you,” Keen says. “I found I was not fully aware of the interview process and how to handle myself.”

With help from local veterans groups, Keen learned how to put together a résumé that effectively translated his military experience into business terminology. He also learned valuable job-seeking skills. After working on various staffing firm assignments, he eventually connected with Dietrich’s company, e-Staff, which quickly placed him on a contract. He proved to be an exemplary employee, and was offered a permanent role with a client. Keen, however, was looking for his best fit. Soon he engaged with TEKsystems, which placed him on his current contract with PNC Bank. Keen loves the
work, the camaraderie with other employees, and the ability to also pursue what has become his life’s passion—helping other veterans.

With help from local veterans groups, Keen learned how to put together a résumé that effectively translated his military experience into business terminology. He also learned valuable job-seeking skills.

After making great strides to reclaim his life, Keen became determined to help others like him. In 2010, he founded Steel City Vets (steelcityvets.org)—a nonprofit organization that provides a
variety of vital services to veterans who call the Pittsburgh metropolitan region home. He wanted to offer the lessons he learned when transitioning, as Keen describes, from “boots to suits.” He
quickly became an outspoken veterans advocate, speaking before numerous organizations around the country about PTSD and other critical topics. Keen also is a regular commentator on veterans issues on his local CBS radio station, and his story has been featured in a number of national and local publications. 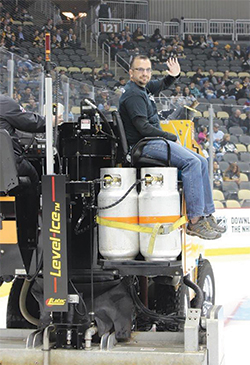 Keen takes advantage of every opportunity to speak with business and civic leaders to debunk negative myths about veterans in the workforce. His acceptance speech as the 2016 National Staffing Employee of the Year at Staffing World® was one such occasion. Keen offered two challenges to industry professionals. The first was to “think back to a point in your career when someone gave you that one chance to prove yourself—that one break that changed your career forever. Hold onto that idea and think, would I be here today if it wasn’t for that one chance?” The second was to “change how you may view veterans. While I know that everyone here supports veterans, this image of a needy veteran has perpetuated for too long.”

Veterans are ready for the chance to prove themselves. They want a job, not a handout, Keen says. Veterans have so much to offer, and often they just need an opportunity to prove it.

Keen credits the staffing industry with helping to change his life for the better. Staffing is a bridge to good jobs for veterans—to give them that chance they want and need. Staffing firms can also provide services, through organizations like Steel City Vets, to assist veterans as they transition from active duty to civilian life.

Several staffing firms in the Pittsburgh area, including TEKsystems, have partnered with Steel City Vets to offer programs on effective job-seeking techniques and employability skills. And in 2015, the American Staffing Association showed its support by contributing $15,000 toward the launch of a new veterans transition program managed by Steel City Vets. The program will offer a variety of learning events, from writing effective résumés to dressing for success to interviewing. Through the program, Steel City Vets will also host small, industry- specific hiring fairs to connect veterans with interviews—or better yet, job offers.

TEKsystems is also honored to call Keen an employee—and celebrate him as an outstanding staffing employee. “TEKsystems is incredibly proud of Ben Keen and everything he has achieved—not only in his civilian career, but in the nonprofit he founded, Steel City Vets,” says Mike Powers, veterans and disabilities outreach program coordinator with TEKsystems and member of the Army National Guard.

Today, Keen has hit a remarkable stride. As a staffing star, valued IT employee, veterans advocate, and dedicated father, he values the flexibility his schedule provides.

“Ben has shown admirable grit, perseverance, and commitment to serving others. His dedication to supporting other veterans like himself is what’s most impressive. Helping veterans transition to successful civilian careers is a goal we share at TEKsystems,” says Powers.

Keen already has linked several veterans to IT jobs through TEKsystems, according to Brian Jendesky, Keen’s recruiter. Jendesky agrees that veterans are an excellent source of talent. In addition to their experiences in the military, they “possess the intangibles—character, integrity, and courage,” says Jendesky, who has worked with Keen throughout his tenure with TEKsystems and serves as his day-to-day contact.

The next National Staffing Employee of the Year will receive national recognition as well as an awards package, including:

Learn more and read about past National Staffing Employee of the Year honorees at americanstaffing.net/NSEY.

Michelle Snyder is director, public relations, for the American Staffing Association. Send feedback on this article to s******@americanstaffing.net. Follow ASA on Twitter @StaffingTweets and on Instagram @americanstaffingassociation.