Temporary help employment edged up 0.5% from October to November, according to seasonally adjusted data released today by the U.S. Bureau of Labor Statistics. Staffing firms added 14,300 jobs in November, which was 1.9% higher than November 2015. Over the past six months, year-to-year job growth has averaged 1.6% per month, compared with 1.9% over the last 12 months.

Nonseasonally adjusted BLS data, which estimate the actual number of jobs in the economy, indicated that temporary help employment increased by 25,900, up 0.8% from October to November. Year-to-year, there were 2.1% more staffing employees in November than in the same month last year.

“While the pace of overall hiring has slowed from peak levels in 2013, there’s some holiday cheer in this month’s jobs report for job seekers,” said Richard Wahlquist, president and chief executive officer of the American Staffing Association. “Given that payroll budgets are being reset for January, December is one of the best times for job seekers to pursue new flexible and permanent employment opportunities.”

Total U.S. nonfarm payroll employment increased by 178,000 jobs in November (seasonally adjusted), BLS reported. Incorporating revisions for September and October, job gains averaged 176,000 per month over the past three months, less than the average of 196,300 for the prior 12 months.

The unemployment rate declined by 0.3 percentage point to a nine-year low of 4.6% in November.

For more information, visit the ASA newsroom. Interviews with ASA executives are available.

About the American Staffing Association

The American Staffing Association is the voice of the U.S. staffing, recruiting, and workforce solutions industry. ASA and its state affiliates advance the interests of the industry across all sectors through advocacy, research, education, and the promotion of high standards of legal, ethical, and professional practices. For more information about ASA, visit americanstaffing.net. 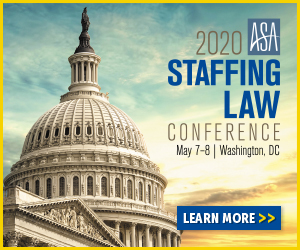