A dynamic online community for ASA members to exchange ideas and best practices, and connect with industry peers in their sector. Visit the site ›
Find Goods & Services

Your #1 daily source for news about the workforce industry. With versions available to members and nonmembers. Visit the site ›
Health Care Reform

From certification packages and study guides to marketing tools and data reports, ASA resources add value to your business. Visit the site ›

New survey data confirm a powerful truth about the staffing industry: Temporary and contract work is an effective bridge to permanent employment. 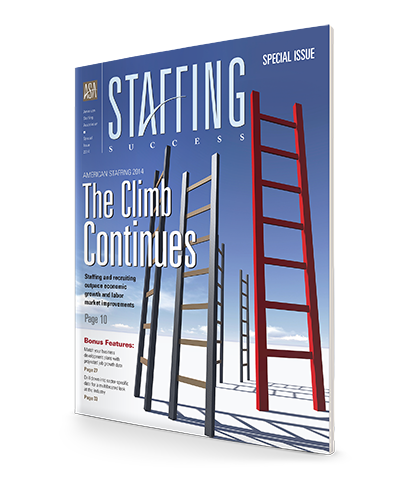 The U.S. economy has been expanding for more than five years, since the end of the Great Recession. But that expansion has been subpar. It took almost the entire five years to recover the jobs lost during the 18 months of the Great Recession. Although the job losses have been finally regained, population growth has produced more new workers than the economy has created new jobs. The unemployment rate has declined to near normal, but labor force participation has declined to the lowest level in decades.

The Future of Jobs

Get Charts and Figures from the 2014 Staffing Industry Economic Analysis