The Staffing Firm of the Future

What follows is a speculative news article written from the future about an IPO of a fictional staffing company. This feature predicts and comments on many of the tech trends that we envision manifesting in the years to come.

Mithril Talent Solutions (NASDAQ: MTHR), a global provider of staffing, technology, and workforce solutions founded in 2017, went public this week. The firm raised $22 billion from investors at a $176 billion valuation, a valuation in the middle of its expected range. Shares ended up 5% at the end of its first day of trading.

The company’s “Talent” segment, its largest by revenue, includes a number of online platform brands (“verticalized marketplaces”) where candidates and clients can find and connect online. It’s five largest such segments—Mithril Health, Mithril Engineering, Mithril Tech, and Mithril Design—each account for more than $4 billion of the company’s top line. Growth has been driven by a combination of organic channels as well as a string of acquisitions of traditional staffing businesses that the company has incorporated into its platform. About half of Mithril’s revenue in these segments comes from remote placements, a trend the company capitalized on early in its history. Its fastest growing segment (though still small compared to other divisions), simply dubbed “Meta”, places vetted but anonymous individuals via smart contracts and an automated assessment process. 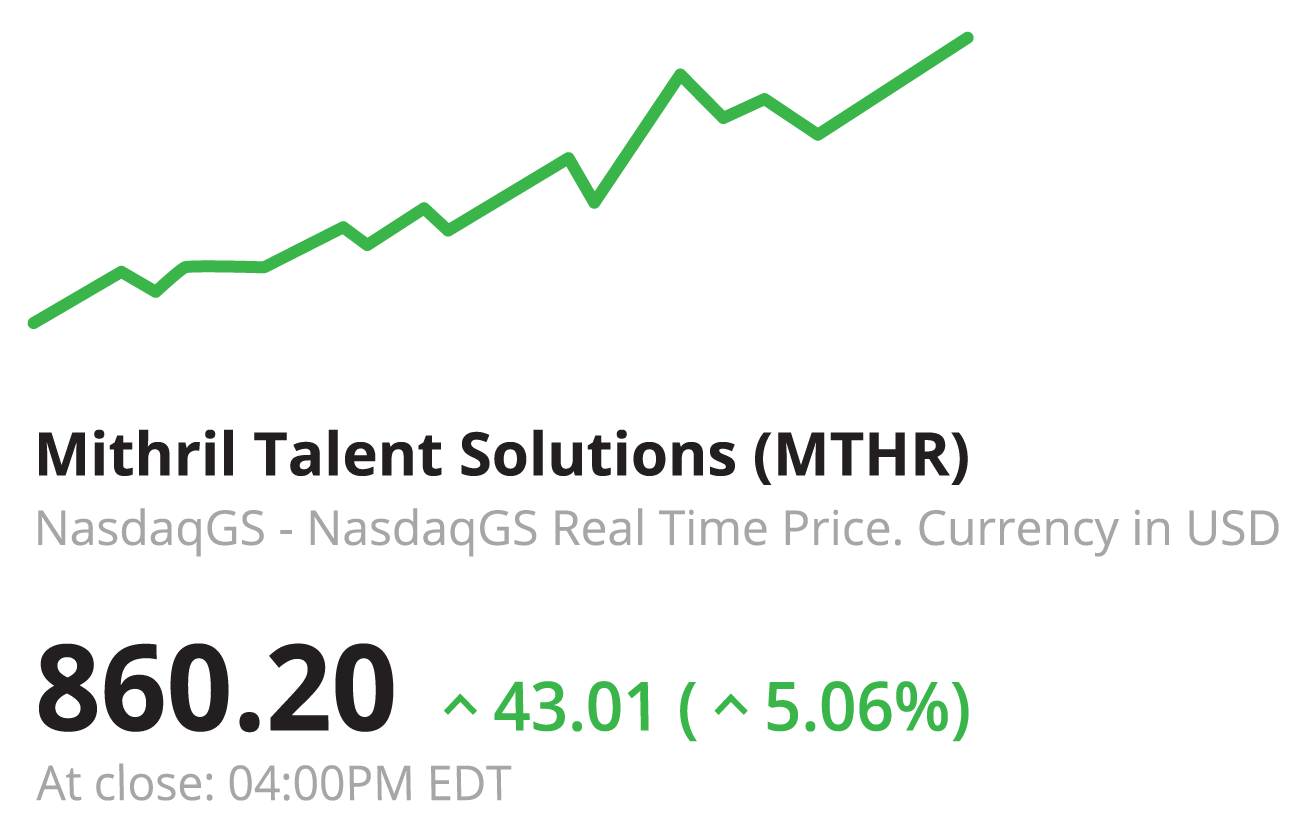 The firm claims it pioneered the “Intelligent Talent Advisor” model, which uses AI and a number of integrations to help companies deconstruct jobs and skills and then match them to individuals and teams best suited for the work. The system does everything from determining appropriate payment terms for individual contributors to overall costs for the outcome and predicting timelines and milestones. Its AI advisory is sometimes sold directly to clients for internal use (to help manage internal resources and project work), but more often, the firm makes money when internal gaps are highlighted and then filled via one of its Talent Segments.

Mithril's "Intelligent Talent Advisor” uses AI and a number of integrations to help companies deconstruct jobs and skills and then match them to individuals and teams best suited for the work.

The company’s other major segment, “Learning & Training”, is a reskilling to placement program that has been growing by double digits for several years. The company offers a library of courses to candidates with a route towards internships, and eventually full time positions, for an ever expanding number of roles. Nearly a million candidates have gone through some form of the program, which the company touts as a potential college alternative and mechanism for laid off (or the increasingly common cohort of “redundant”) employees to find new opportunities.

“When we started Mithril, our mission was to increase access to work and opportunity by leveraging technology,” says CEO and founder, Rebekah Chatterpri. “We are honored that we’ve been so successful in this mission over the last 13 years, and look forward to continuing to help individuals from all walks of life achieve their career goals and aspirations via the help of technology.”

For the first half of the last decade, the staffing industry at large benefited from tectonic shifts in demographic and macroeconomic trends towards more flexible work. As recently as 2025, the industry generated around $610 billion in revenue globally according to data from the American Staffing Association, with the two largest firms capturing just 5 and 6 percent of the market, respectively, and some 50,000 firms estimated in operation. Over the last few years, however, the industry has seen massive consolidation, as tech-first platforms such as Mithril and others have begun swallowing large swaths of the industry by aggregating supply and demand, and providing tools that clients could use to better manage their workforces and hire on demand.

"We’re ambivalent to whether a worker comes from our network, or a client’s, or their assignment is full time or temporary. Our mission is to make it as easy to participate in the economy and for companies to access talent as sending a text message."

“What we found was, whether to use a contingent worker or a full time worker, it was kind of a silly question to be asking, and mostly driven by well meaning but poorly written legislation,” says Chatterpri. “Our big breakthrough came when we realized, people, companies, they just want to get work done. We use technology to make sure that the match is spot on for any given role or project, and the payments and everything is taken care of. We’re ambivalent to whether a worker comes from our network, or a client’s, or their assignment is full time or temporary. Our mission is to make it as easy to participate in the economy and for companies to access talent as sending a text message.”

The industry is now approaching $800 billion in revenue globally, though gains over the last few years have not been shared equally. Founded just 13 years ago, Mithril has become the second largest player in the space, and the top two firms now account for nearly a quarter of industry revenue. Once dominant incumbents find themselves on the backpedal as spend increasingly flows to Mithril and similar platforms, and smaller staffing firms have been shuttering and selling in droves. It wasn’t always this way – how did we get here?

Are you prepared for tomorrow? ASA’s analysis tool, free to ASA members, will help you determine how your current tech stacks up. Try it now »

From Startup to Global Domination

It wasn’t immediately clear that Mithril would become the global powerhouse that it is today. The company started as a “vertical marketplace” for healthcare workers, connecting healthcare professionals to open short-term roles via a mobile application. The company spent its first several years focused on that particular niche, with the primary focus of getting as many candidates and clients as possible onto the platform, and making the entire experience as seamless and easy as possible primarily through technology-based automation and tools that made it easy for candidates and clients to connect directly.

In 2022, on the back of a $140 million round of venture funding, Mithril launched two new verticals, tech and engineering, and sought to repeat the playbook it had perfected in healthcare. At this time, the company was still a relatively niche player, though its growth rate was substantially above average, and the company’s growth was accelerating despite it getting larger.

Around this time, the company also launched its AI Talent Advisor, which proved to be a pivotal growth engine for the company. The tool enabled the firm to position itself as the arbiter of strategic outsourcing deals, determining which candidates from a vast network of suppliers (or even internal employees) would be best fit for open roles. Since the firm had perfected its own internal processes for sourcing qualified candidates, it both gave the firm a foot in the door at large clients and enabled Mithril itself to supply an increasingly large portion of the outstanding job orders that resulted from its use, and also gave the firm a leg up on big picture labor trends it could capitalize on (like how Amazon used to make internal product launch decisions on how well 3rd party vendors were doing in its marketplace).

The company now describes itself not as a staffing firm, but as the “Google for flexible work”, essentially offering API access to its network of talent, curated via its AI Talent Advisor.

By 2025, the firm had become one of the largest 100 staffing firms in the world. It unsuccessfully tried building out a reskilling program, though it eventually found its way via the acquisition of two online learning solutions and a vertical bootcamp (the firm has since added to its portfolio). This acquisition brought the company the depth it needed for content and skills attainment validation, as well as a number of early key client partnerships that the company would go on to scale in a massive way. (For example, the division works with Smeagol Cloud, where it certified some 7,000 Cloud DevOps engineers in 2029 alone).

Over the next five years, the company’s flywheel took off, and it began a venture-fuelled spate of acquisitions of traditional staffing firms that helped bolster its race for supply and demand aggregation.

The company now describes itself not as a staffing firm, but as the “Google for flexible work”, essentially offering API access to its network of talent, curated via its AI Talent Advisor. Mithril still employs around 1,100 “Talent Advisors”, whose job description is more that of a talent agent than a recruiter. The company gives wide leniency to Talent Advisors in how they engage with candidates, with many purportedly receiving perks that rival those of large technology companies.

It’s “Meta” offering may offer a glimpse of where this type of work is headed. Still a relatively small division inside the firm, it essentially operates as an anonymous Linkedin-type ecosystem where vetted candidates participate in work that is all managed via smart contract and paid via cryptocurrency. The company has created an arduous assessment process for inclusion and skills validation, and individuals can participate and be compensated in the ecosystem in various ways (e.g. reference checking, referrals, skills validation or work history, or even completing assignments). All transactions are tracked and managed via blockchain smart contracts, including things like background checks, assignment lengths, and work history details. The offering has been doing well in the technology sector (where employers are more likely to be comfortable hiring “anonymous workers”), though a few major employers have begun dipping their toes in such offerings as privacy and data concerns continue to plague employers and legislators alike. The firm claims that the system is the first truly “bias-free” and fully meritocratic hiring marketplace, with individuals able to present themselves however they best see fit. Investors see it as an area of potential (but risky) future growth for the firm, skeptics see it as an opportunity to skirt labor regs.

“We’ve created an operating system for work, and tools to enable it at every point in a candidate’s journey”, says Chatterpri. “While we are proud of what we’ve built, this is still the first inning.”

The Future is Now. See How Well You're Prepared for Tomorrow.

ASA's analysis tool will help you determine how your current tech stacks up. Explore building a customized tech stack based on your firm’s size, industry, and tech adoption approach. Free for ASA members.
Start Here