Share
The 117th Congress and the Biden administration bring with them a focus on new legislation and discussions aimed at continued recovery from the pandemic. Here’s how the results could affect
staffing companies.

While the start of 2021 ushered in plenty of change in Washington, DC, the same could not be said when it came to state capitols across the country. On the federal level, president Joe Biden took the oath of office on Jan. 20, giving Democrats control of the White House and Congress for the first time in over a decade. Republicans fared far better on the state level, where they managed to increase their hold on governorships and state legislatures. But across the country, the agendas of policy makers at all levels remain
largely focused on the Covid-19 pandemic. >>>

ASA has published issue papers that discuss both the new federal COBRA subsidy and the expansion of ACA subsidies.

The American Jobs Act. Shortly after passage of the American Rescue Plan, president Biden introduced a broad, wide-ranging infrastructure bill known as the American Jobs Act. While this $2 trillion bill contains many traditional infrastructure projects—such as repairing and upgrading highways, bridges, streets, and tunnels, and modernizing the country’s electrical grid system—it also contains projects such as expanding long-term care under Medicaid and enacting the pro-union Protecting the Right to Organize (PRO) Act, that critics claim have nothing to do with infrastructure. Republicans have countered with their own $700 million infrastructure plan, aimed mostly at transportation projects.

As with most massive legislative projects, the biggest question appears to be, “How are we going to pay for it?” Democrats are looking at targeted tax increases on corporations and the wealthiest Americans, while Republicans support the creation of user fees to pay the bill. The White House continues to stress they prefer a bipartisan bill, but House and Senate leaders are preparing once again to proceed through the expedited budget reconciliation process.

Nevada—Ban on Construction Staffing. Legislation that threatens staffing interests, both legally and operationally, has been signed into law in Nevada. The law bars Nevada construction contractors from using staffing agencies to provide skilled labor such as electricians, carpenters, and drywall hangers. Unskilled labor (e.g., cleanup workers) is not affected.
Nevada unions successfully lobbied for the legislation (AB 227), ostensibly to address worker misclassification and other abuses—and to prevent the loss of millions in state revenue due to unpaid
employment taxes. But the real motive, we suspect, is to take jobs from staffing agencies so the unions can fill them through their hiring halls and recruit them for membership.

ASA hired a top Nevada lobbying firm and marshalled a coalition of affected Nevada staffing agencies and contractors in a grassroots campaign to oppose the bill. In letters, issue papers, testimony, and meetings, we argued the bill would destroy thousands of jobs provided by staffing agencies that are not engaged in the abuses cited by the unions. Staffing agencies are licensed as private employment agencies (PEAs) under Nevada law and thus are required to pay the employees’ wages, withhold and remit payroll taxes, provide workers’ compensation insurance, and issue W-2s. At ASA’s urging, veterans and minority groups joined in opposing the bill.

Our efforts raised substantial bipartisan concern in the minds of legislators regarding the need for the bill and the harmful impact on staffing firms and their contractor clients. But unions hold such sway in the state that the bill passed the Democratcontrolled legislature on straight party line votes and was signed by Gov. Steve Sisolak.

The law violates a fundamental industry principle and longstanding ASA position—that the business of staffing is separate and distinct from the business of clients and that staffing agencies are not subject to the laws applicable to a client’s business merely because the agency supplies employees to that business. Accordingly, we plan to challenge the law in court. 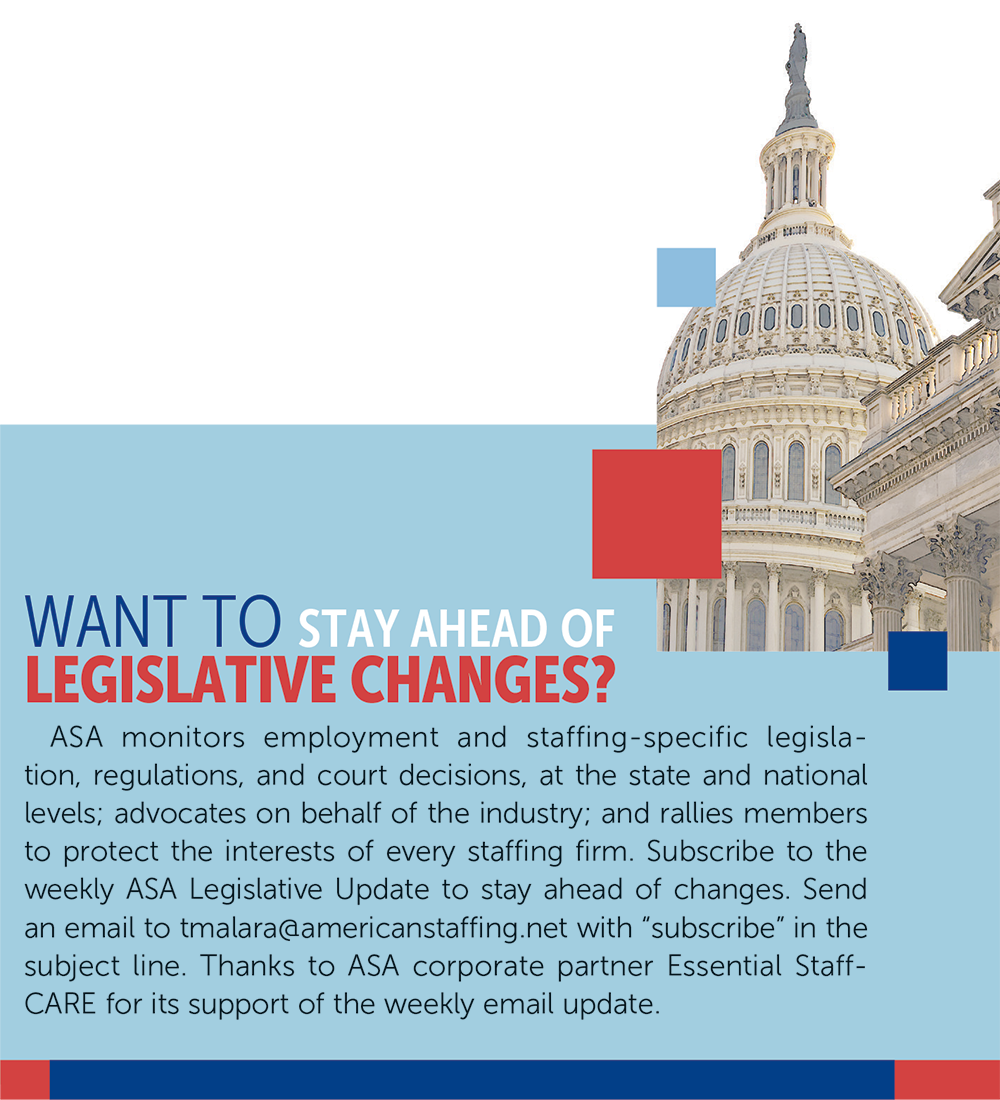 The law also makes clear that staffing agencies must inquire about the work site employer’s health and safety practices and job hazards prior to placement of temporary workers. In the event a staffing agency becomes aware of job hazards that are not mitigated, it must make the host employer aware and, if the hazards are not corrected, remove the workers from the assignment.

The law was drafted by the Washington State Department of Labor and Industries (L&I). Given that passage was all but certain, ASA, its lobbyist, and members of the ASA employee safety committee
worked with L&I to remove unnecessary and overly burdensome requirements.

ASA also was engaged in important workplace safety litigation, arguing in May before the state Supreme Court in a case brought against a staffing agency by L&I. L&I contends that the
staffing agency should be liable for workplace injuries suffered by a temporary worker at the client job site, while the agency claims it should not be liable because it took reasonable steps to protect its workers. ASA argued that L&I effectively is trying to impose a strict liability standard that would hold staffing agencies liable for work conditions and incidents over which they have no control and irrespective of the steps they took to protect the workers. The court’s ruling is expected later this year.

Rhode Island—Strict Liability. Advocacy by ASA and the Rhode Island Staffing Association helped persuade state lawmakers to put legislation on hold that would have imposed new burdens on staffing clients.

Rhode Island bill S 139 would have made any organization that uses temporary labor automatically liable for staffing agency wage violations. ASA and RISA submitted testimony arguing that the bill was unnecessary because staffing clients have long been responsible as joint employers under a wide range of federal and state labor and employment laws. A coalition of Rhode Island businesses also objected to the bill, arguing that it would penalize users of contract labor even if they had no knowledge of any violation of the wage payment laws.

Faced with unified business opposition, the senate labor committee referred the bill for study, effectively killing it for the year.

Connecticut—Predictive Scheduling. Following a pattern seen in multiple states over the last several years, Connecticut SB 668 requires that certain types of employees—including certain workers in the mercantile trade, in restaurant occupations, and in hotels or long-term health care services—be provided with advance notice of their work schedules. Such workers would be entitled to additional pay if they are not notified in a timely manner that a shift has been cancelled or that their work hours have been reduced. The legislation also prohibits certain businesses from using temporary and other workers supplied by third parties, including staffing firms, unless such businesses first offer additional work to their existing employees.

ASA and its lobbyists (Powers, Griffin & Hill) opposed the bill because it could impose onerous administrative burdens on staffing firms and limit opportunities for temporary workers. Trade associations representing restaurants and retailers argued that, on top of the many issues they have with the legislation, passing a bill aimed at two of the hardest hit industries during the pandemic just as they are starting to recover would kill many businesses and cost hundreds of employees their jobs.

At press time, the future of this bill was uncertain. The bill has passed the Senate, but the governor has yet to announce his intentions and House leaders seem reluctant to bring it up for a vote. The legislature adjourns for the year on June 9.

Illinois—Progressive Discipline. Working with ASA lobbyist Paul Rosenfeld of the Government Navigation Group, as well as members of the Illinois Search and Staffing Association, ASA was able to stop further consideration of a bill that would mandate how employers discipline and discharge their employees, and require severance pay for discharged workers.

Among other things, Illinois HB 3530 and SB 2332, the Illinois Employee Security Act, would

ASA met with the House bill’s lead sponsor, Rep. Carol Ammons, and several proponents of the bill to discuss our concerns. During the meeting we explained that while we agreed that no employee
should be terminated without explanation, we were concerned that the legislation would create an undue burden on employers that could adversely affect job creation.

Faced with fierce opposition from the entire Illinois business community, House and Senate leadership sent the bills to committee for further consideration, meaning that neither will be enacted this year. If the bill becomes a topic of further study during the summer, ASA will continue to meet with lawmakers to explain our concerns. 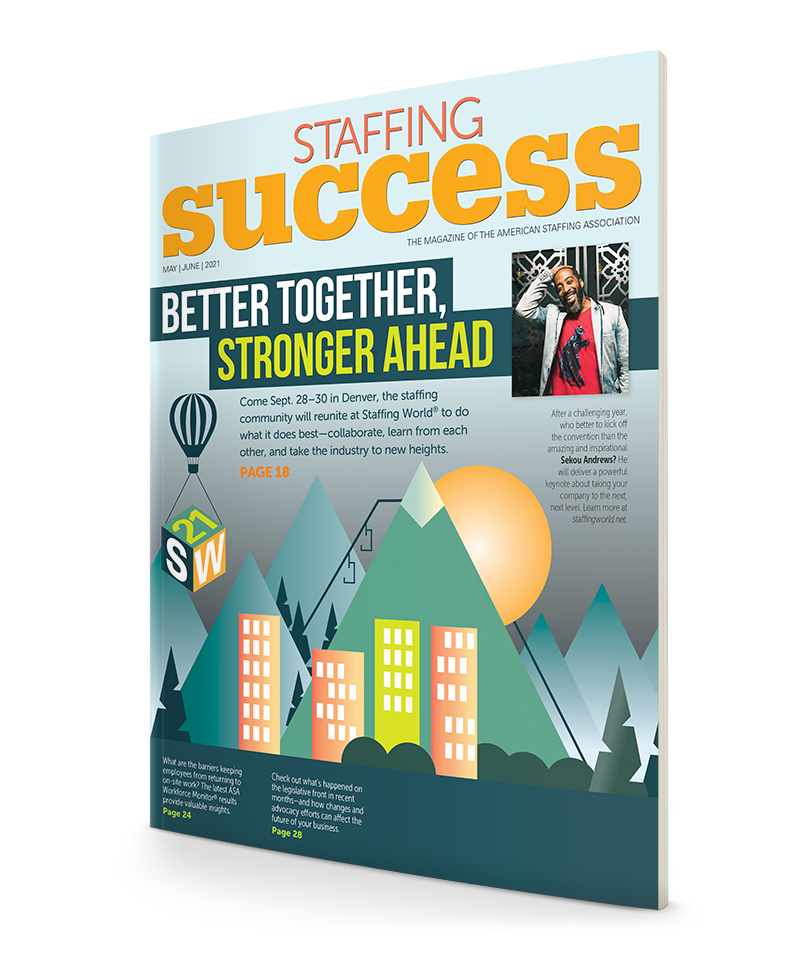 BETTER TOGETHER, STRONGER AHEAD. Let's collaborate, learn from each other, and take the industry to new heights at Staffing World® 2021 in Denver.
Learn more about this issue »
Related Articles

Sorry, the content you’ve selected is for members only. Maybe it’s time to join! Or if you’re already a member, please log in. Join today to get access to all ASA webinars and on-demand presentations. The ASA Resource Llibrary includes hundreds of presentations that members can view at their convenience and at no charge. Valuable webinars… END_OF_DOCUMENT_TOKEN_TO_BE_REPLACED

Sorry, the content you’ve selected is for members only. Maybe it’s time to join! Or if you’re already a member, please log in. Join today to get access to all ASA webinars and on-demand presentations. The ASA Resource Llibrary includes hundreds of presentations that members can view at their convenience and at no charge. Valuable webinars… END_OF_DOCUMENT_TOKEN_TO_BE_REPLACED

Sorry, the content you’ve selected is for members only. Maybe it’s time to join! Or if you’re already a member, please log in. Join today to get access to all ASA webinars and on-demand presentations. The ASA Resource Llibrary includes hundreds of presentations that members can view at their convenience and at no charge. Valuable webinars… END_OF_DOCUMENT_TOKEN_TO_BE_REPLACED

After years of effort by ASA, the Ohio Staffing & Search Association (an ASA-affiliated chapter), and allies in the Ohio Chamber of Commerce, the Ohio legislature quietly and without public fanfare repealed the state sales tax on employment services. The repeal provision, which was part of a massive state budget bill, was signed into law… END_OF_DOCUMENT_TOKEN_TO_BE_REPLACED

As the California legislature approached its deadline for moving bills from the house of origin to the second house, advocacy efforts led by ASA, its affiliated chapter California Staffing Professionals, and California lobbyist Mike Robson of Edelstein Gilbert Robson & Smith LLC were instrumental in derailing two California bills that would have had a major… END_OF_DOCUMENT_TOKEN_TO_BE_REPLACED

LandrumHR, a full-service professional employment organization and human capital firm headquartered in Pensacola, FL, has earned the Safety Standard of Excellence® mark from the American Staffing Association. The program, developed by ASA and the National Safety Council, promotes industry-wide safety best practices. By participating in the Safety Standard of Excellence program, staffing agencies, their temporary… END_OF_DOCUMENT_TOKEN_TO_BE_REPLACED

Tidewater Staffing, a staffing agency providing workforce solutions for ship repair, manufacturing, and warehouse employers headquartered in southeast Virginia, has earned the Safety Standard of Excellence® mark from the American Staffing Association. The program, developed by ASA and the National Safety Council, promotes industry-wide safety best practices. By participating in the Safety Standard of Excellence… END_OF_DOCUMENT_TOKEN_TO_BE_REPLACED