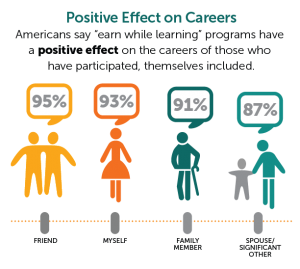 With the widening skills gap and ever tightening labor market, businesses are exploring ways to develop skilled workers and build their own bench of talent. Apprenticeships have resurfaced as an attractive offering that allows workers to earn a wage while learning new skills and vocations needed by employers.

The latest ASA Workforce Monitor® delved into what Americans generally think about apprenticeships, how they stack up against college education, and what effect they have on careers. The survey of more than 2,000 U.S. adults was conducted online by the Harris Poll.

A Way to Kickstart Careers 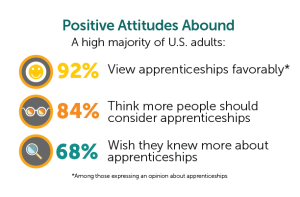 The survey found that general views and opinions on apprenticeships are overwhelmingly positive. Nine in 10 Americans who either were apprentices themselves or know someone enrolled in these earn-while-learning programs say the experiences had a positive effect on that person’s career, according to the ASA Workforce Monitor findings. 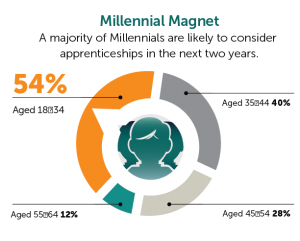 The vast majority of U.S. adults with an opinion about apprenticeships view them favorably (92%).

Another four out of five Americans think that more people should consider apprenticeships, and seven in 10 wish they knew more about these vocational opportunities. Only recently have apprenticeships resurfaced in the media, and these survey results indicate an appetite for a better understanding. 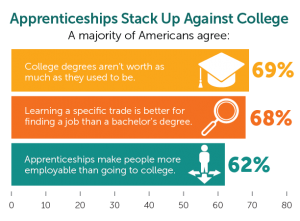 While four in five U.S. adults (79%) are familiar with apprenticeships, misconceptions abound. A notable one is that these programs are not paid—only two in five Americans (38%) characterize apprenticeships as paying workers a wage, even though a paid work component is a foundation of these career opportunities, according to the U.S. Department of Labor.

Millennials (aged 18‒34) are particularly open to apprenticeships. After being given the definition of an apprenticeship as “a program that combines a paid work component and an educational or instructional component, where a person can learn relevant knowledge and skills on the job,” a majority (54%) say they are likely to consider these learning opportunities in the next two years—significantly more than any other age group.

A Better Way to Prep for Work 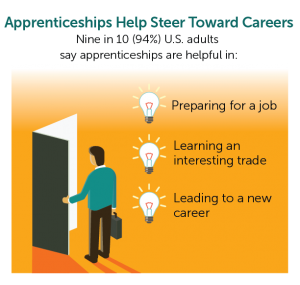 It may come as a surprise that a majority of Americans (62%) believe that apprenticeships—or earn-while-learning vocational opportunities—make people more employable than going to college, according to the survey results.

Seven in 10 U.S. adults also say that learning a specific trade is better for finding a job than a bachelor’s degree, and that college degrees aren’t worth as much as they used to be.

Another notable finding: A majority of Americans disagree that completing an apprenticeship will limit one’s future employment options (71%) and that earn-while-learning programs generally lead to a lower salary than occupations requiring a college degree (60%).

Nine out of 10 Americans concur that apprenticeships are helpful in leading to a new career. And they think that these vocational opportunities are valuable because they provide people with the ability to not only prepare for a job, but to learn an interesting trade.

About nine in 10 U.S. adults (87%) advise that it is smart to consider both apprenticeships and college as options. What better news for job seekers than to have even more career path options, and for businesses to have a viable option to cultivate their own skilled talent. 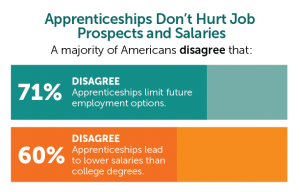 A Strategy for Staffing Companies

How can staffing companies take advantage of these earn-while-learning programs? Start your own, or partner with those who can be instrumental in reaping results.

Last year, DOL issued a new policy directive stating that apprenticeships will be available to staffing firms outside of the typical construction context, opening the door a bit wider to the staffing and recruiting industry. The directive allows companies, trade associations, and unions to develop their own apprenticeship-program guidelines—generally taking a lighter touch than DOL did with previous programs.

“Apprenticeships or earn and learn programs offer great value to job seekers because they get paid while learning a new vocation—available across a wide variety of occupations and industries,” says Richard Wahlquist, ASA president and chief executive officer. “U.S. businesses need to act now to launch work-based learning programs to address the widening skills gap and help attract and hire the best candidates in this tight labor market.”

Cynthia Davidson is director of research and Tim Hulley is a manager of research for ASA. Send feedback on this article to s******@americanstaffing.net. 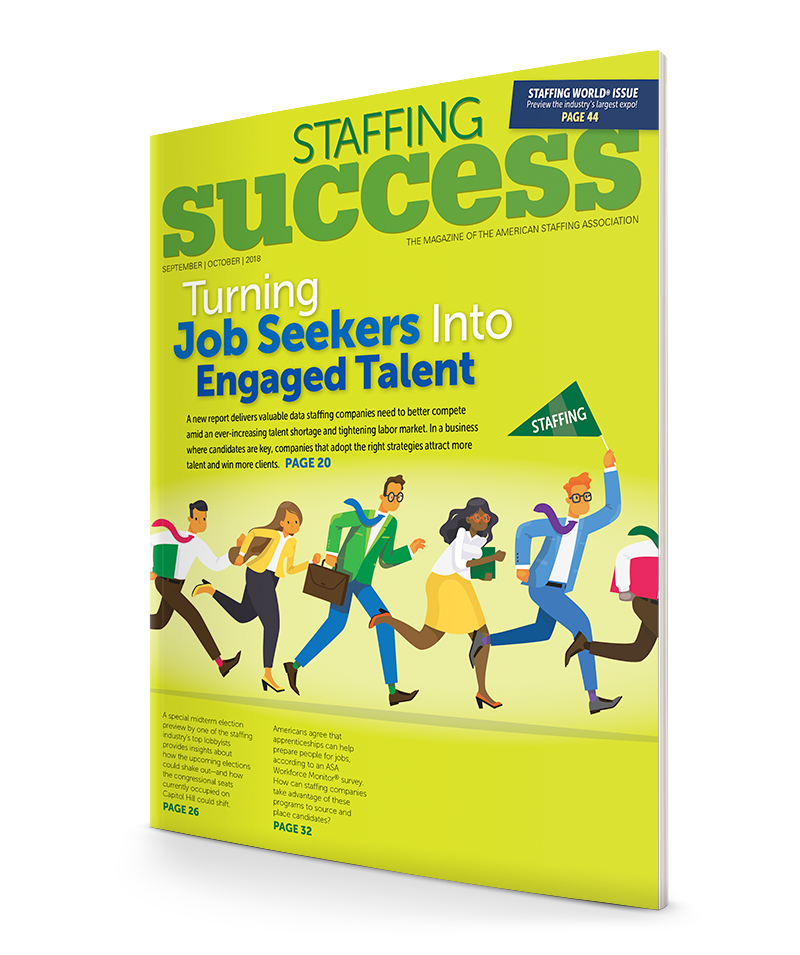