By Adam Stone
Share
Even for those who were secretly hoping it might be just a passing fad, there’s no avoiding social media’s influence on how U.S. companies operate, communicate, and share—and how the staffing, recruiting, and workforce solutions industry positions itself for growth.

Of all Americans who say they are internet users, 79% use Facebook, 33% use Instagram, 33% use LinkedIn, and 25% use Twitter, according to the Pew Research Center. Together, these statistics account for pretty much every client, potential client, employee, and future employee a staffing company knows or wants to know.

As social media channels continue to extend their reach, forward-thinking staffing companies continue to adopt and hone strategies that include newer options—like Facebook Live and Snapchat filters. Staffing Success reached out to several member companies to provide a case study-like look at how your colleagues are using social media right now and what kind of results they’re getting.

At boutique recruiting firm Talis Group in Louisville, KY, president Renee Fulton relies on social media to stay top-of-mind among her stakeholders, without having to spend endless hours doing so.

“We use it to keep clients and candidates warm, to keep them thinking about us,” she says. Lately she’s done this via a series of quick-hit articles called “The Job Hunt.” The first installment, 800 words on interviewing best practices, went up on the company website with cross-promotion on Facebook and LinkedIn.

“With LinkedIn, I feel very comfortable that we are reaching professional people. I have 700 personal connections and we have a Talis Group business page, and we use both of those avenues. The individual recruiters also use their own connections,” Fulton explains.

Fulton says that using social media channels like Facebook and LinkedIn are a good fit for pushing out content. It is a proactive way to position your company as a thought leader and a jobs expert. It also creates an opportunity to connect and inspire conversations.

At the very least, if content shared via social media can help her capture someone’s attention, then it is time well spent—and, she adds, it doesn’t have to take that much time. Fulton estimates that promoting her company’s content online takes no more than two hours each week. However, she’d like to do more: “I could push the articles out a few more times, maybe join a few groups,” she adds. “You have to build it up to get them to bite.”

Seattle-based Parker Staffing Services scored a big branding win with Snapchat this year. While some may dismiss the photo-sharing social platform as a toy for teens, Parker found it could serve a serious business purpose.

The company wanted to get in front of the 45,000 students and family members gathering for a commencement ceremony at the University of Washington, without being overly obtrusive. Considering that Snapchat boasts about 100 million active daily users, Parker decided to use a Snapchat geofilter to stake out a presence.

“When we found out how widely it was used, we decided to give it a try,” says Jacob Rhoades, vice president of marketing for Parker. The mobile aspect also made it an obvious fit. “In a college graduation you sit there for six or seven hours as a captive audience and what do you do? You take out your phone,” says Rhoades.

Snapchat users who took pictures at the event were given the option to frame their photos in a quirky graphic that celebrated the graduating class while incorporating a discreet Parker logo.
“We wanted something playful, something eye-catching,” explains Parker marketing specialist Gia Cicconi. “We also looked at what was trending and we saw a lot of these rough-sketch designs, these things that were playful, almost like doodles. We thought that would be cool and kitschy, which worked for this audience.”

It did work. In a five-hour period, 603 users sent images using the filter, resulting in more than 16,400 photo views. At a total cost of $526, that’s just three cents per view. The company estimates it reached 13.5% of graduates this way.

Here are a couple of tips from Parker: “We’ve found that Snapchat prices fluctuate. The prices seem to be lower the earlier you do it, and then as you get closer to the event the prices go up a little bit,” Cicconi explains. “But you can’t reserve it until you have the artwork, so you have to move fast.”

Now, the Parker team meets quarterly to scan the horizon for Snapchat opportunities.

“It’s by no means the only tool in the toolbox, but it is a part of our strategy. It’s a great opportunity to show off your culture as a company, share content, and share a little bit of who we are,” Rhoades adds. “It’s not about pushing people to apply, apply, apply. We want people to see us as a nice organization to work with, to see that we are friendly.”

Ultimately, Facebook Live is working for Award Staffing, but it is not the company’s only solution and the team knows it likely won’t be this effective forever.

With six locations throughout the Minneapolis-St. Paul area, Award Staffing specializes in light industrial, professional, and hospitality jobs. Nicole Berg, the company’s manager of marketing and technology, uses Facebook Live to get the word out about just about anything worth talking about.

“We are all about hot jobs, hot tips, events that are coming up, and employee news,” Berg explains, and adds that the live streaming strategy “has been one of our top recruiting sources.”

The company was an early adopter of Facebook Live when the social service first launched about a year ago. Award Staffing saw it as a free and easy way to communicate with various audiences.

“Anyone on our recruiting or management team can broadcast. Typically, they will ask me when they see an opportunity to do something because we don’t want to oversaturate it,” she explains. “Then it will be me or the vice president of operations who gives the go ahead.”

The live broadcasts (and subsequent shares) have been particularly helpful when there are multiple positions to fill—for example, 100 jobs at an upcoming festival. In situations like this, social media’s broad reach can be a powerful tool.

The Award Staffing team does some planning before going live, which includes working out the length of the broadcast and developing a rough script.

“Because it is live, we want to make sure we are doing it right the first time,” Berg says. She also vets prospective presenters. “We are known for having extremely enthusiastic team members talk about these jobs. We don’t want somebody to get on screen unless they feel that passion. That is what we want when we go live—we want them to share that sense that this is a life-changing opportunity.”

With 14,000 followers, Award Staffing knows its videos are reaching their destination. Even when the team goes live with a mid-day broadcast, many followers will take note of the feed and go back to watch it when they have time. “Even if they are not on Facebook when this is going on, that’s OK. We know they will find it later in their feed,” Berg adds.

Ultimately, Facebook Live is working for Award Staffing, but it is not the company’s only solution and the team knows it likely won’t be this effective forever. “We have had job fairs where 85% of the people there were there because of a Facebook video,” Berg says. However, “eventually it will lose the luster of being something new and novel. We are utilizing it to the best of our ability in this moment, but we know that tomorrow it could be something completely different.”

LinkedIn is familiar to most as a professional space where colleagues come together. But what about those other platforms? Especially if you’re over age 30, there’s a fair chance the social media landscape seems to be growing more complicated each day.

Twitter. President Donald Trump’s favorite social hangout can be a great place for staffing firms to search for contacts and expand their base. “It is good for looking at competitors and beginning to follow their followers. Those people will follow you back and a lot of times they will be good quality candidates or clients,” Smith says.

“Twitter also has an advanced search option where you can type in things like ‘hiring’ or ‘jobs.’ That’s a good lead-generating tool because companies will often post something to their social platforms before they reach out to a staffing firm or a job board. Then you can do some one-to-one direct outreach, and it is focused and targeted.”

Instagram. “This one turns into a little bit more of a branding play,” Smith explains. “With Instagram, you are not providing a link back to your website, so it is hard to get direct one-to-one action. But it is a great way to show off the company and the staff’s personality. It’s a PR tool.”

“When you do community events and community outreach, Instagram is a great way to publicize that. It also makes a ton of sense to use their advertising platform. You can target very specific demographics and direct them back to a job link. It’s an interesting way to drill down and spend recruiting dollars more strategically.”

Snapchat. “This is challenging because it is a much younger demographic. But you also get geofilters,” Smith notes. “If there is a college recruiting fair, you can set a geofilter to cover just that event. Anytime someone is using Snapchat in that area, they will see a branded filter and your company logo. It becomes a frame that people can put over their photos when they post to Snapchat from that event. You can get in front of a lot of people, but it’s also hard to tie a very specific ROI to that kind of activity.”

Facebook Jobs. While Facebook remains largely a place to hang out with friends, Smith sees commercial potential for the recently unveiled Facebook Jobs tool. Smith’s team tested it with a job opening for an administrative assistant and got seven applications within 24 hours. “The downside here is that the candidate interface is kind of sloppy. Candidates are sending messages through Facebook Messenger, which means the staffing firm has to have someone checking Messenger and directing candidates back to the application or the company website,” he notes.

As for traditional Facebook, Smith says it is worth a company’s time to stay active on the social channel, despite perceptions of it as being largely a social space. “Companies can use it to improve positioning, to share thought leadership. It can be an amazing resource for reaching both passive and active job seekers, and it can be a great referral source. You can have 10,000 followers but each of those followers may have 1,000 friends. It’s a great way to expand your network.”

Adam Stone, a freelance writer based in Annapolis, MD, is a regular contributor to Staffing Success. Send your feedback on this article to s******@americanstaffing.net. Engage with ASA on social media—go to americanstaffing.net/social. 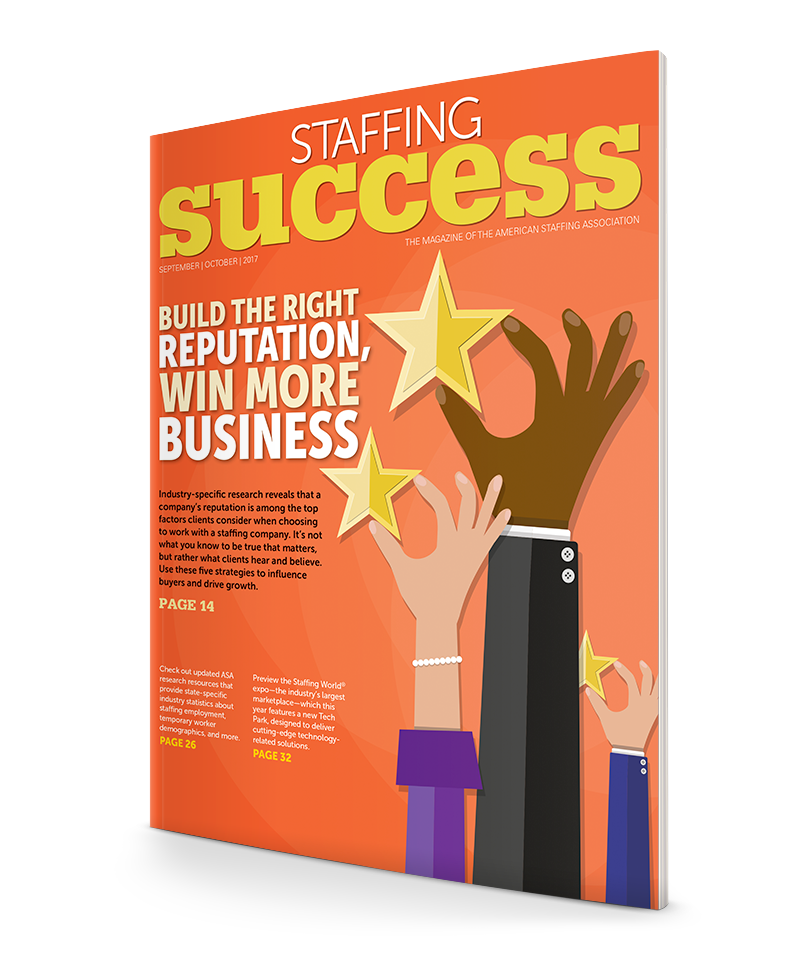